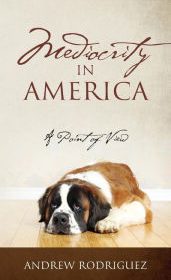 Andrew Rodriguez’s Mediocrity in America is a work of cultural criticism, imagined from the perspective of Titan, a pet dog. In 13 concise chapters, Titan shares his musings on topics that include the deficiencies of higher education, the rise of vulgarity, and the demise of cultural literacy.

Titan introduces himself at the book’s start, telling readers that he is a St. Bernard, one who is philosophically minded with a point of view likely to offend. Aside from a few random mentions of dog activities, etc. throughout, he writes about his opinions much as any author would.

Rodriguez sees modern liberals as disciples of Barack Obama, calling them “Obamites.” According to the author, these individuals are “incapable of discerning beauty and majesty from the mundane,” and the swelling Obamite ranks are beginning to establish a “paralyzed society that will disintegrate…”

A central complaint for Rodriguez is the decline of traditional values as evidenced, in part, by the apparent rise of vulgarity which, in perhaps his most eloquent passage, is described as “changing arts into trades, science into commerce, noble pleasures into sensuality…”  He finds evidence of this in sexually explicit media, ubiquitous profanity, and the allegedly confused sexual identities of American teens; he believes Obamites are too “naive, misinformed, and uneducated” to detect this decline.

While provocative, as promised, Rodriguez’s book suffers from several flaws.  First, he rails against conventionalism while also celebrating traditional values; he casts aspersions on liberal arts university professors for indoctrinating students with their Marxist agenda but closes the chapter with a quote from Santayana—a leftist Harvard philosophy professor. Second, it’s unclear why the author uses a dog as narrator. Ultimately, the conceit feels contrived, or worse, a timid attempt to hide behind a fictional character.

In the end, Mediocrity in America lacks persuasiveness and will quickly alienate any readers who disagree with the author’s viewpoints. Its appeal will likely be limited to those who already share the author’s opinions.