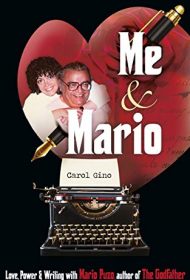 Carol Gino first met Mario Puzo when, working as a nurse, she was hired to care for his wife, suffering from terminal cancer. Before Erika Puzo passed, Gino writes, she asked her to look out for her husband and their five children. What started as a friendship evolved into a relationship (“as lovers and buddies”) that lasted 20 years, a story detailed in Me & Mario.

Gino writes that after two marriages and unrewarding dating experiences, “Mario was a godsend for me. A man who liked to lay around reading, discussing great ideas and telling stories.” The meat of the book is their interaction, particularly debates about the male-female dynamic, love and spirituality.

But Gino also discusses Puzo’s writing habits. Puzo was forever immersed in his novels and the attendant research, and Gino paints an interesting picture of a master at work, scribbling on legal pads, pounding away on a typewriter, and fearing – literally fearing – a computer.

For her part, Gino had always wanted to write a book on nursing. With Puzo’s guidance, she completed The Nurse’s Story, which launched a writing career resulting in five more books. She also completed Puzo’s final work, The Family, after his 1999 death.

There are plenty of such tidbits in Me & Mario, and Gino is an intelligent, enjoyable writer. She presents interesting stories with details that keep the narrative moving. Some of her conversations with Puzo seem somewhat repetitious and slow the pace, but this isn’t a fatal flaw.

Gino delivers a readable, intimate look at an important figure in 20th century popular culture. Puzo fans will appreciate this book, as will anyone interested in how two strong personalities can flourish together.