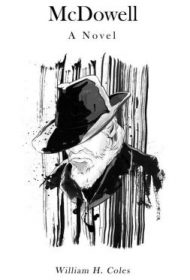 William H. Coles’ novel McDowell traces the rise and fall of prominent surgeon Hiram McDowell, whose self-involved actions ripple through the lives of those around him.

Fueled by ambition, Hiram’s achievements in medicine, politics, philanthropy and mountaineering make him as arrogant as he is successful, and his rise is littered with those he used for gain. In the opening scene, he saves himself by leaving his injured climbing partner to die on Mount Everest, establishing a pattern he repeats in relationships throughout the story.

When Hiram’s grandson commits an act of violence and then tries to commit suicide, it spurs Hiram to take an action that lands him in prison. Escaping, Hiram uses his smarts and survival skills to build a tenuous life on society’s fringes.

Meanwhile, a fading TV journalist seeks to publish a “tell-all” biography chronicling the depth of Hiram’s narcissism. As Hiram’s character evolves through pain and misfortune, however, her task becomes less straightforward.

The story is told through the lens of several characters, including Hiram’s children (talented, insecure Sophie; hapless, good-hearted Billie; and neurotic, troubled Ann). Through them, we experience the bewildering juxtaposition of Hiram’s love for his family and his narcissism.

Strong, precise scenes, interesting dialogue and compelling characters keep pages turning. Coles achieves beautiful moments when describing the local life at Hiram’s philanthropic hospital in Nepal “where all of civilization seemed to exist writhing on snake-width curves of the never-straight road” and during Hiram’s descent into the world of drifters where he begins to appreciate “unsuccessful” people and the kindness they show.

At times, the book’s hasty transitions between chapters and experimental tense shifts are clumsy. And while Coles’ industrious examination of many topics, (i.e. gun control, euthanasia, religion), and large scope of characters add realism, the breadth and brevity can leave plot threads feeling unfinished.

Such flaws aside, Coles paints a psychologically compelling portrait of a man hardened by success and brought to a new level of self-awareness through loss.