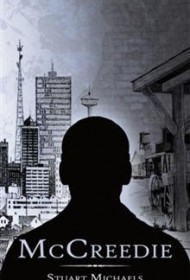 When a group of disillusioned people seeking a simpler life set up a replica 19th century community reminiscent of a western American town, they soon discover that the Wild West earned its name for a reason – and not for its peaceful ways. A showdown forms the core of McCreedie, as ruthless outlaws set out to claim Branigan County for their own. This classic good-versus-evil tale has the novel twist of parallel story lines set in both the 19th century-style community and contemporary London.

The story begins in Branigan County with a brutal killer and his men tightening their grip on the community, terrorizing men, women and children. The plot soon shifts from America to London and the home of one of the world’s richest men, who has a dual existence: he’s Matt Branigan in London and Marshal Sam McCreedie in Branigan County. As the protagonist recovers from his 40th birthday party in London, a call summons him back to Branigan County, where he has long been presumed dead.

“Two men helped him leave and for ten years they have kept his secret to protect his true identity, current circumstances have forced them to call in that debt,” writes author Stuart Michaels. “Given no choice Sam McCreedie has returned to Branigan County to make good on the troubles he walked out on.” McCreedie seeks out Lee Stone, the outlaws’ leader, knowing that only one of them will survive. Secrets of McCreedie’s past are revealed that may ultimately decide the fate of Branigan County.

This story offers characters who are not always as they seem, plot surprises and an intricate underpinning to keep it all plausible. Some minor characters are stereotypes, but the marshal/millionaire is well-developed and complex – ostensibly a good guy, he has plenty of sins of his own. McCreedie would appeal to fans of Westerns, but anyone who likes a good yarn might enjoy this story.