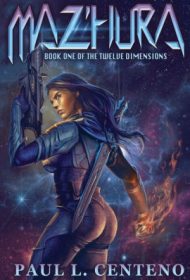 The first installment of Paul L. Centeno’s Twelve Dimensions saga is an action-packed fusion of military science fiction and adventure fantasy that revolves around a heroic starship captain whose search for the truth leads to her ostracism by her own leaders.

While on a mission, Shirakaya’s ship is attacked by koth’vurians, a species of shapeshifting monstrosities capable of flying through space that were allegedly exiled eons ago to the primordial void by the Tal’manac Order, whose religious scriptures state that the koth’vurians won’t return until the end times. When the principled captain reports the attack to her superiors, she’s ridiculed and called a liar. With her career on the line, she sets out to understand why the virtually indestructible beasts have returned—and to find a way to defeat them once and for all.

There’s a lot to like here, especially Centeno’s focus on character development—particularly secondary characters like the alien-terrorist-turned ally Xorvaj. Coupled with impressive world-building, this focus begins to pay real dividends in the latter chapters as readers are rewarded with a breakneck-paced, fully immersive, and plot-twist-laden read.

Although this novel is literally 300 pages of nonstop action, the story’s real hook doesn’t appear until the end of the book. Without giving away any spoilers, the applaudable plot revelations at novel’s end are essentially where the real story starts. This novel is in many ways a prelude to Shirakaya’s main storyline.

Unfortunately, the story is marred by the largely unwarranted sexism throughout. For example, Shirakaya massages soap over her “voluptuous breasts” as she showers, and a misogynistic character, Dojin, seems to delight in statements like “the captain’s a cunt…” and “I guess that means all women are bitches.”

Although the overt (and unnecessary) sexism may turn off more than a few readers, this is a satisfying blend of science fiction and fantasy—and a mostly promising start to what could turn out to be a highly entertaining science fantasy saga.