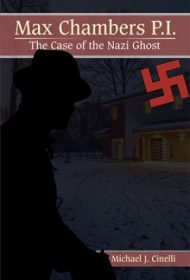 Michael Cinelli’s slim novel offers all the fundamentals of a noir private eye story: a detective in a small office with a feisty female assistant and a trusted sidekick, and a plea for help from a client he would rather turn down, but for the wad of cash he’s offered. And Max Chambers P.I. slips in some surprising elements as well.

The book opens with a group of American GIs rescuing Jewish prisoners from Buchenwald concentration camp at WWII’s end. Max Chambers, a private detective who ends up leading his patrol when his sergeant is killed, is traumatized by the skeletal survivors and the odor of death that permeates the camp, as well as the subsequent death of a fellow GI and childhood friend.

Four years later, Chambers has opened a detective agency in his hometown, New Rochelle, New York. He has a beautiful wife who is shy in public but a tiger in bed and a supportive extended family. But then a man he rescued at Buchenwald hires him to find the camp’s commandant, who is allegedly hiding in New Rochelle. While Chambers doesn’t want to relive the terrible war memories, he finds himself tracking a conspiracy of postwar Nazis in his own backyard.

Cinelli’s writing style is in the noir mold: short, snappy and evocative: “Max opened the large window behind his desk and breathed in the cold air. He still had the horrid smell of the camp in his nostrils, in his office, in his mind. He knew he was trapped in this business.” The author races readers through a story that weaves typical P.I. fare – stakeouts, fist fights, car chases, and evil antagonists – with complex threads of Nazis and thugs and a surprise ending that brings closure to Chambers’ Buchenwald trauma.

The Case of the Nazi Ghost is a satisfying, quick romp of a read. It will leave readers hoping for future volumes featuring Chambers and his likable supporting cast.