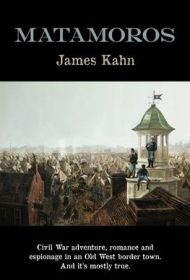 Author James Kahn is known for his best-selling novelization of Star Wars: Return of the Jedi. This will come as no surprise to readers of Kahn’s latest work, as there are many parallels between Clayton Wilkes, the Byronic hero of Matamoros, and Han Solo of Star Wars fame. And the cast of scalawags and con men who frequent Clayton’s Brave River Gambling Emporium could have stepped right out of the Mos Eisley Cantina.

During the height of the Civil War, the Union set up a blockade to stop the South from shipping cotton to Europe to trade for weapons and other needed goods. This made Matamoros, Mexico, across the Rio Grande from Brownsville, Texas, a key to any hope for a Confederate victory. Wagonloads of slave-picked cotton made the trek across the desert to Matamoros, where the bales could be shipped from neutral Mexico and exchanged for European munitions.

In this novel, the action picks up when Allie Stoneman, Clayton’s former lover and con-artist partner, arrives in town with tons of cotton from the plantation owned by her late husband. This signals the beginning of a series of con games that will influence the outcome of the war. But who is conning whom? Clayton’s and Allie’s allegiances are on opposite sides.

The Union and Rebel forces are heading for a showdown on the Texas side of the river, but just where and when the battle will take place are uncertain. As the drama continues, each side prevails in minor skirmishes, all influenced by information provided by double agent Clayton or the provocative Allie. And just to spice things up, Clayton’s cousin, John Wilkes Booth, drops by for a sword fight and to pick up a derringer.

Kahn mixes his fictional characters with real historical figures, and ably presents an accurate picture of racial attitudes and tensions on the East Texas border and the low regard for human life during the savagery of the Civil War. But what makes this book particularly special is the author’s skilled development of Clayton, a character readers will like despite his many unsavory qualities.

Two maps and a lengthy cast of characters are presented at the book’s beginning. Readers might refer to the maps occasionally, but they won’t need the character list. Kahn makes each one memorable as his engrossing tale progresses, and readers will enjoy every bit of the journey.