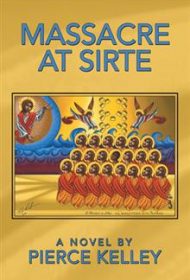 In Massacre at Sirte, Pierce Kelley tackles the difficult task of recreating a recent historical event: the final night in the lives of 21 men in Sirte, Libya, who were marked for beheading by a group that later identified themselves with ISIS.

The abductions took place in February of 2015, “on a Friday afternoon, just past noon,” writes Kelley. Most of the men kidnapped were from Egypt. All were Coptic Christians from a single village, working at a construction site. Since none survived, Kelley can only re-imagine the incident in his book.

The author notes in a disclaimer that he has put words into the characters’ mouths to present opposing views. Since the victims of the actual incident were a homogeneous group of simple day laborers, Kelley also admits to broadening that cast in service to the story. His characters include a learned historian, priest-to-be, salesman, and others that offer intellectual contributions as needed in the narrative. This lends a contrived feeling to the story, which reads, in the beginning, like the opening paragraphs of a history class syllabus as it feeds readers background.

This artificiality continues as the story unfolds. The men choose to spend their night acquiring high-level history lessons about everything from Abrahamic religions to minute details of the Crusades and European colonization. Characters ask opportune questions at just the right moment, and, aware of their imminent death, repent for their sins— a convenient laundry list containing homosexuality, murder, and unfulfilled talents. Additionally, Kelley creates another man who is set free to return home to tell the story.

Ultimately, the narrative bogs down under the weight of the author’s heavy hand, reading more like an intellectual exercise than a gripping story fueled by living, breathing characters. Those looking for powerful fiction are likely to be disappointed by Massacre at Sirte. Readers who understand this is more history lesson and discussion of moral issues than compelling fiction, however, may find some rewards.