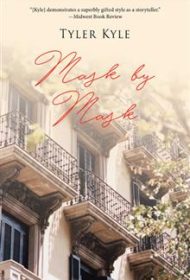 Tyler Kyle’s Mask by Mask traces the experiences of the beautiful, talented 28-year-old Ada, who hides behind an icy veneer that masks painful past experiences.

As the story opens, Ada has returned to Barcelona 10 years after leaving. She’s there to make sense of a violent personal attack from which she carries both emotional and physical scars, and to find Nathan, the man who saved her life—and the one male she could not seduce; it seems few can resist the tall, blonde, designer-clad woman. Although engaged, Ada acknowledges that she’s not in love, and, as she is “unabashedly carnal,” wonders about committing to “fidelity for life.”

A successful wedding photographer, Ada rediscovers Barcelona, but she also finds herself reliving the past: her parent’s divorce, her growth as a photographer, and always, her many conquests. But instead of making peace with this past, she finds herself rattled by what it evokes. Without daily routines and deadlines, she feels unsettled and soon questions the sanity of making the trip, even as she daydreams of Nathan and the possibility of reconnecting.

This is a well written, interesting story with colorful descriptions of Barcelona and often set in the lush landscape of beautiful people and fine couture. When Ada visits the marketplace, she doesn’t see fresh food, but “pyramids of blushing peaches” and “chubby brown hands full of squid.” Her characters wear Louboutin stilettos and carry Chanel bags.

Unfortunately, the story continually shifts from past to present, often without transition, making the narrative hard to follow, especially early on. For example, in one scene Ada is by the pool ordering a drink. In the next paragraph, she’s in a studio apartment with a surfboard, bike and unmade bed. While readers eventually catch up with the narrative, such sudden shifts can be frustrating.

Overall, the story is likely to be enjoyed most by patient readers who appreciate a tale of an independent, unapologetic woman on a quest of self-discovery.