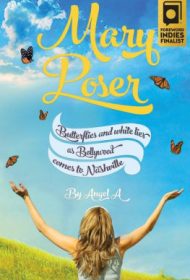 In this romantic novel, title character Mary Poser knows exactly who she is and where she’s going—until an encounter with an unusual man.

Raised in Nashville by a Baptist preacher father and overbearing Southern mother, Mary’s life has been predictably stable, with the pride of fulfilled expectations. But at an international film festival, she meets Simha Das, a beautiful and exotic Indian film director, and in an unexpected moment, her certainty about her future dissolves. Fearful that her devoutly Christian family would never accept her falling in love with a Hindu, she tries to maintain her distance from Simha, regardless of their intense connection, and opts to start a life with a man her parents love, but who broke her heart.

As the story unfolds, some drawbacks become evident. Simha tries to teach Mary the basics of his religion, but through this character, the author paints a one-dimensional picture of Hinduism, reducing it to generic buzzwords (“chakras,” “idols,” “divine feminine energy,” etc.) rather than conveying a rich, ideological philosophy. When Mary perceives that Simha has disrespected her faith and values, readers may wonder why her religion is the only one that seems to be taken seriously.

At book’s end, two plot points only hinted at previously suddenly become critical to the story,  begging the question of why readers were left out of the loop. While the writing is pleasant and some characters are compelling, these surprises are jolting and frustrating.

Ultimately, Mary Poser falters under the weight of its flaws. While the conceit is promising, revision would greatly enhance the book’s appeal.