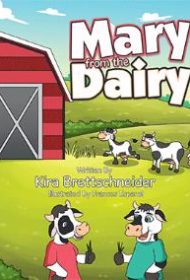 A cow with the poor fortune of living in parched Australian pastures sets out on an around-the-world journey to find a greener home in Mary from the Dairy, a story that offers young readers a peek at different places.

Mary is a dairy cow in the Australian Outback. Although she has good friends there, the drought and lack of tasty food cause Mary to dream of other places, so she books a ticket on Bovine Air to Victoria Falls, then the UK and mainland Europe, and finally to North and South America.

Mary meets new friends in each place, including a French rooster who offers her frog legs; a horse in Kentucky named Amber McCheer Face who tells her she’s too “curvy” to run the Kentucky Derby; and flight attendants who suggest she try out New Zealand. There, Mary finds the rolling, verdant hills she’s pined after for years.

Supported by bright, fun illustrations, Mary from the Dairy is an easy, approachable way to introduce beginning readers to travel. In addition to visiting Italy and other tourist hotspots, her trips to Canada, Kentucky, and other less high-profile destinations add color and depth to the story.

However, the tale has some narrative flaws. Many verses deliver AB rhymes, but the author occasionally switches to other rhyming formats, impacting the story’s overall cadence and making reading aloud difficult. In addition, some lines are italicized, for no apparent reason, and punctuation errors need correcting. Finally, some references may be confusing for young readers. Those outside of Australia, for example, won’t know what a “Mulga tree” is; Victoria Falls is called “Vic Falls” without clarifying its location; and Mary is described as “vegan,” also without explanation.

Mary from the Dairy would be greatly improved with revision. Still, some children may find inspiration to embrace travel in this adventure story about finding joy away from home.