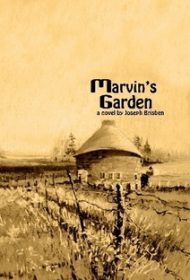 The story is narrated in flashbacks by Madge Duckworth, who introduces herself as Marvin’s “late wife.” Her harrowing account of life with her abusive, drunken husband, soon leads us to wonder if he’s the one who sent her to the afterlife.

Madge and Marvin marry early in the story, and it’s not long before he’s beating her severely. Her friends encourage her to leave, but she resists. When she’s diagnosed with cancer and undergoes a mastectomy, her husband is a grudging caregiver. Eventually, Madge decides life would be better without him and sets out on a  roundabout path to ending Marvin’s life.

Madge is the story’s main character, but its real star is Pond Creek, a farming community in Oklahoma with a tiny town center. The details of farm life, from caring for sheep to the struggle to keep up a farm in the changing economy, ring true, and the town bar as both watering hole and nexus of gossip also feels authentically drawn from life.

Brisben includes nitty-gritty details about the couple’s sex life and the changes it suffers as they age and face illness; when Madge befriends her housekeeper and they spend time together, Marvin accuses her of being a lesbian. There’s a wild twist at the end of Marvin’s Garden, which comes as a surprise in a story so steeped in realistic details, but it’s a fitting (and funny) conclusion.

Brisben has written an unusual novel that at times recalls the work of Stephen King for its equal ease at depicting the real and unreal. But for all its flights of fantasy, it keeps one foot on the ground, offering readers a satisfying and entertaining experience.