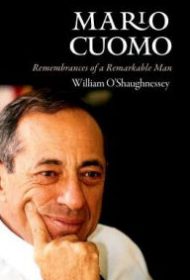 William O’Shaughnessy—the gregarious long-time talk show host at WVOX radio in Westchester County, NY—was a friend and confidant of Mario Cuomo, the famously eloquent three-term governor of New York, who died in 2015 at age 82. In this memoir of their friendship, the author shares fond personal stories, others’ memories and, blessedly, a whole lot of Cuomo’s own words.

A Democrat once considered a likely presidential candidate (he never ran), Cuomo made frequent call-in appearances on O’Shaughnessy’s show to discuss issues of the day. But Cuomo, a self-described “progressive pragmatist,” also seemed genuinely fond of the colorful, patrician Republican media personality, whom he called “Brother Bill.” In return, the author offers this book as a “love letter.”

O’Shaughnessy says he had access to unpublished materials, but unfortunately does not provide citations, and the best stories are his own, anyway. The author recalls Cuomo asking him “was that attractive young man really a Bush?” after young Billy Bush asked him a question at a news conference. Another time, at a reception, O’Shaughnessy watched Cuomo dodge host David Rockefeller and chat up the groundskeeper because he was uncomfortable with the “tony, upper-crust” crowd.

Despite haphazard organization, repetition, and padding (there’s nearly 100 pages of talk show transcripts), O’Shaughnessy beautifully uses Cuomo’s own words to show us his wit, intelligence, and spiritual bent. Many speeches feature Cuomo’s favorite themes: searching for something larger than ourselves and loving thy neighbor. The author prints in its entirety the 2005 “Meditation on Human Values” speech in which Cuomo, an outspoken Catholic, used Jesuit philosopher Pierre Teilhard de Chardin’s words as a starting point to expound on faith.

O’Shaughnessy does an admirable job proving Mario Cuomo was “a remarkable man.” Despite  its flaws, this book provides a strong introduction to Cuomo, as well as a largely entertaining read for those who think they knew him well.