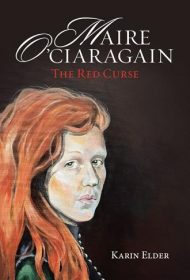 Karin Elder shifts between an ancient world of mystical mystery and a modern landscape of quotidian ennui in Maire O’Ciaragain: The Red Curse.

The book tracks two heroines in separate worlds. One is Kelly Duffy, an earnest, kind middle-aged woman running a popular café in Banbridge, County Down, Ireland in 2017. The story follows her as she deals with the everyday disappointments and victories of small-town life. Kelly is a trusted confidante of her customers, and with her foundations in the local church and community, she seeks to follow her inner compass as she meets Jim, a man who may prove to be a life partner.

Through these daily travails, Kelly dreams of Maire O’Ciaragain, daughter of her clan’s chief in the misty prehistory of 15th-century Druidic Ireland. After her father names her the next leader of the clan, Maire undergoes warrior training. Her father’s druid and her trainer Ivan join her on cross-country journeys, and she ultimately confronts would-be invading English earls. Throughout, Maire faces the demands of being a faithful lover and good mother, and Kelly wakes from these dreams feeling the immediate impact of Maire’s struggles.

As Elder flips between centuries, she offers depth to both stories. While it takes a while adjust to the narrative flow, the author has a knack for transporting readers across the ages. The book mostly functions on two separate tracks, until Elder eventually intertwines these two threads near the story’s end.

The author’s sentences tend to unroll in fragments and streams of consciousness at key points. While potentially off-putting to those used to a more formal narration, the impressionistic approach seems fitting for a tale of two lives linked across centuries.

Ultimately, she succeeds in creating two storylines that are compelling and heartfelt. The result is a novel that’s bound to entertain those with a love for fantasy and Celtic history, as well as readers who appreciate the careful character study of a thoroughly modern protagonist.