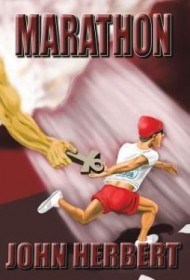 Marathon is about more than a competition between the top runners in the world. It’s also about a race for Canadian protagonist Richard Marlborough to find himself amid deep-seated anger issues and rebellion that haunt his life in this richly textured story set in the late ’60s to early 1980.

The book opens with the starting gun that pits Richard (aka “The Kid”) against an African champion runner dubbed “Black Lightning.” As the race progresses, Richard’s early years unfold in flashbacks that unveil his unlikely path to this race since derailing in his teen years after physically attacking another runner. Along the way, Richard is gradually inspired through the support of coaches, his mother and a close Italian family.

Religious parallels and human vulnerability fuel this story, much of which is told through Richard’s thoughts. He struggles between the demon of despair and the Angel of Light as he fights through extreme pain and personal doubts to reach the finish line. The story is written experimentally, almost in play format and using unique punctuation, poetry, and song lyric fragments. Sometimes, the author writes in a quick staccato, mimicking the runners’ quickening pace. Herbert’s sentences are crisp and observant, here describing the competitors: “Breaths flare like fiery blasts from the convulsive nostrils of an angry dragon. Lungs afire, legs like jelly, mind agreeable but the body rebels.”

In the end, though, the unusual format and extreme length make this read challenging. It appears that Herbert is attempting to artistically mimic the grueling task of a marathon runner, not only with the book’s length but with the way he painstakingly details the central race. While the intent is admirable and the writing often fascinating, the drawn-out story is eventually likely to lose all but the most dogged of readers.

That said, those who persist will be rewarded at the finish line with a unique, astute and thought-provoking morality tale.