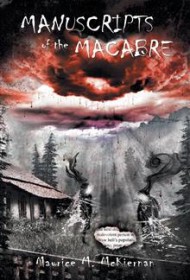 The collection includes the novelette “The Torment Within,” and five short stories: “The Purging Storm of Hell,” a grandfather’s reminiscences about what happens when Hades runs out of room; “Bison on the Range,” in which a mobster in witness protection gets discovered by a nefarious neighbor; “Lady Elusion,” the tale of a man who thinks he has found the ideal woman (but is there really an ideal woman?); ”Red Lights in the Fog,” an homage to the haunted-house genre; and “The Disposing of the Decomposing John Doe” in which a drug dealer has to figure out what to do when he finds a dead body behind the couch.

The author’s best effort as a horror story is “The Torment Within, which develops a character accidentally contaminated with the lycanthropic curse. As anyone familiar with the werewolf legend knows, once a person is bitten, nothing good is going to happen, and here, nothing good does. With some further work and a backstory, this piece could be developed into a chilling novel

Although “Lady Elusion” is the least horrific of the tales, it best shows McKiernan’s talent for characterization. While the story is more sad than frightening, readers will feel the protagonist’s emotions.

The one flaw of these narratives is the overuse of “thesaurus” words. Just one example, from “The Purging Storms of Hell”: “His puerile mind began filling with trepidation from the fact that if his elder relative did not know what was taking place, it must be an enigmatic event.” Such lofty words grow tiring when used so profusely.

Still, the collection, as a whole shows surprising range and imagination. Overall, Manuscripts of the Macabre should prove entertaining for horror fans.