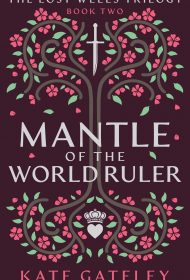 Prophecies are mutable in Mantle of the World Ruler, Kate Gateley’s compelling second installment of The Lost Wells Trilogy.

In the first book, 30-year-old linguistics student Julia Harrison learns of her status as a witch, as well as a love connection with Irish scholar and warrior Dom O’Brien that’s spanned countless lifetimes. The pair work with allies to thwart Cassius, a villainous “Child of Rome” who’s been hunting her for millennia.

At the outset of the second book, Gateley’s protagonists have derailed an ominous ancient prophecy, but Cassius won’t be stopped so easily. Seeking to defeat his longtime nemesis, he returns to Rome to glean another prediction from an ancient sybil, in hopes of achieving immortality.

Dom and Julia, meanwhile, work to decode the new prophecy, one that foretells of “the Sovereign standing tall,” and insists that “the World Ruler too must bear his crown.” This prediction adds new perspective to Dom’s role in the battle, even as Julia continues to understand her status as a wielder of ancient magic

In their struggle to defeat Cassius, the pair travel to many locales, connecting with characters from the first book, such as Dom’s longtime friend Ronan, who’s given more depth and intrigue here. Gateley also introduces a broader cast of interesting characters, including an ancient sect of wielders and seers called the Knaves.

As in the first installment, Gateley melds a knack for storytelling with academic expertise in ancient history, Celtic mythology and epic fiction. Her roots in historical fiction and romance genres are clear, as she bides her time exploring the longtime ties between Julia and Dom.

This facet works alongside plenty of action, intrigue and adventure, but with 500-plus pages, there’s also time to get to the story’s more harrowing segments. For fans of the first book, that pace will feel familiar. For fantasy readers more accustomed to a rapid roll-out, patience pays off in this exciting second installment of this promising trilogy.