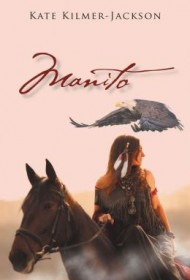 In Kate Kilmer-Jackson’s engrossing debut, a vengeful spirit plagues an Illinois mansion over the course of three centuries.

Called “Manito” by Native Americans, the spirit is conjured in 1750 by a powerful female shaman. In the novel’s somber opening section, she is raped and mortally injured by two savage white men as she prepares to give birth.

Part two jumps to the 1940s to tell the tragic story of Jim and Betty Hudson, whose lives are destroyed when they move into White Oak Manor, which has been owned by Jim’s family for many years. Jim’s mother warns them that the old house caused her miscarriages, but she is dismissed as a hysterical woman—as is Betty when she becomes pregnant and hears a baby crying in the manor. A feisty feminist undercurrent is one of the many pleasures in Kilmer-Jackson’s richly layered text, which paints a full-bodied portrait of warm, gossipy small-town life in this remote rural area.

We learn in the novel’s third and longest section, set in the present, that generations of pregnant women have felt the Manito’s malevolent force. When Adam Bowman and his wife Ande buy White Oak Manor with plans to turn it into a bed and breakfast, they discover in a previously sealed-off storeroom 18th-century journals written by Billy Brown, a horrified eyewitness to the gruesome rape who later built the manor near the site. Billy’s journals tell more stories of miscarriages, and two pregnant visitors to the Bowmans’ B&B have violent reactions to the house’s atmosphere.

Kilmer-Jackson keeps the supernatural element believable by not overdoing it, and by allowing a few of her well-drawn characters to voice skepticism that is effectively rebutted by others. She maintains interest over the course of a long, leisurely narrative by punctuating it with bursts of scary mayhem from the Manito, including a bravura finale that puts an ancient evil to rest.

This is gripping fiction from a natural storyteller.

BlueInk Heads-Up: The Star designation is offered with the understanding that the book’s copyediting issues remain in need of attention. The author frequently misuses homonyms (“illicitt” for “elicit,” “peeked” for “peaked,” etc.) among other issues. These don’t interfere with the enjoyment of this terrific story and could easily be cleaned up by a competent copyeditor.