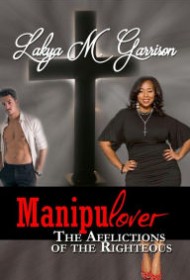 A character’s progression from a series of problems and sorrows to a new way of life can be one of the most powerful story arcs in literature. Lakya M. Garrison’s Christian novel relates such a tale, but with less successful results.

Manipulover tells the story of a contemporary African American woman named Tramel, who is struggling to navigate a complicated world of love and urban life. Pained by too many sexual encounters gone wrong, she’s bereft of any emotional connection and hopes for a new way of life through the church. But the difficulties of her past—shown through flashbacks of young Tray after her mother dies—keep her from moving forward. Whether trapped in an erotic “friendship” with a man name Trent, a co-dependent relationship with ex-con Enrique, or a joyless marriage to a church reverend, Tramel’s troubles have readers hoping for change.

Technical issues also sabotage the story. Garrison confusingly shifts verb tense from past to present in the middle of sentences; the text is peppered with typos, punctuation errors (i.e., quotation marks forgotten) and misspellings, sometimes making the narrative hard to follow.

There’s certainly a need for more African American voices in Christian fiction, but Garrison’s novel requires thoughtful revision, both in content and copyediting, before it can appeal to an eager audience.