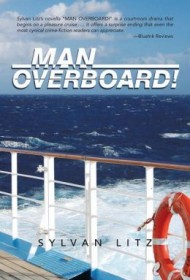 Sylvan Litz’s novella Man Overboard! is a courtroom drama that begins on a pleasure cruise. While it isn’t always smooth sailing, it offers a surprise ending that even the most cynical crime-fiction readers can appreciate.

In this story, a popular Philadelphia family man, Jack Knight, takes his wife on a Caribbean pleasure cruise. On the first night, they find themselves sharing a dinner table with John Sweeney, a boorish, drunken ex-NYPD cop who has anger management issues and an attractive (but perpetually embarrassed) wife.

By their third night at sea, the vulgar Sweeney has all his tablemates, including Jack Knight, pitying his ceaselessly apologetic wife. And an after-dinner cigar on deck turns deadly when Sweeney accosts Knight, accusing him of canoodling with his wife. They scuffle, and the brute Sweeney tosses Knight overboard.

Months later, the castaway Knight resurfaces, and Sweeney is charged with attempted murder. Sweeney’s defense: He believed Knight was hitting on his wife and Knight stumbled overboard during their ruckus. After a rather anti-climactic courtroom scene, the jury rejects Sweeney’s story and sends him to prison for 15 years.

Litz’s dialogue is a little hackneyed (“Oh my God, where is he? What am I going to do?” Knight’s wife exclaims, for example, after he goes missing). The action never really gets the heart pumping, and, in fact, the short story feels much longer than it is.

But the ending buoys Man Overboard! as Litz skillfully tweaks our expectations of the courtroom genre and delivers an impressive and unexpected final twist. Readers willing to stay on this cruise to the end will be rewarded with the surprise, but others may find the journey’s pleasures are too slight to rescue the trip overall.