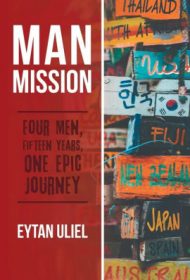 As this eventful novel opens, two Australian mates decide to mark their arrival at adulthood by embarking on an adventure into territory neither knows much about.

Labeling the undertaking, in a flash of machismo, a “Man Mission,” they blunder along a hiking trail in New Zealand, discovering that neither knows much about hiking and camping either. Eventually rescued from their incompetence by a group of armed, beer-swilling drug runners, the first Man Mission staggers to its pitiful end.

Nevertheless, the pair is eventually joined by two other former schoolmates, and the adventures become “boys will be boys” yearly excursions to exotic global locales. These ramblings put the four in some tight spots, such as biking through a tunnel in Japan with heavy truck traffic whizzing past within inches and nearly drowning in New Guinea when a kayak capsizes. And yet always, they look forward to the next year’s challenge.

The Man Missions continue for years, during which time the boys go from trading barbs about sexual prowess to discussing the relative merits of Viagra and Cialis with some businessmen in a Taiwanese steam bath. Meanwhile, back in the real world, marriages come and go, children grow up, careers change, and affairs take place.

Although the yearly adventures appear to offer mostly an escape from adult pressures, some participants seem to consider them a necessary part of growing up. As the narrator points out: “by allowing myself to behave like a little boy … I have gone some way to learning what it means to be a man.” Unfortunately, although the characters do evolve throughout the narrative, it’s not always easy to see how these annual excursions contribute to those changes. Thus, the wanderings seem to lack an overarching purpose, and the novel is more episodic than enlightening.

Still, the narrative is lively and well-told, offering interesting characters. Those drawn to the wide variety of challenging adventures may enjoy these episodes of risk and danger.