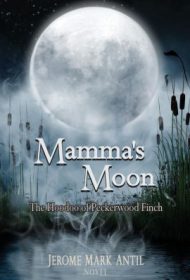 Antil provides brief backstories for newcomers. Peck, once a runaway illiterate who was abused as a child, now has his GED and attends night school at Tulane University. He’s engaged to his sweetheart and lives with his friend and mentor, Gabe, a retired military veteran. Successful women Sasha and Lily Cup again serve as the men’s guardian angels, thanks to their wealth, intelligence and connections.

Abandoned as a child and placed in an abusive home, Peck has only a general idea of where to begin his search for his origins. He has no recollection of his mother or other family members—only a vague memory of talking to the moon as an infant. Thanks to a psychic, a hypnotist and Elizabeth, his first lover, Peck acquires more leads. (Despite the novel’s subtitle, there’s little involvement with the occult beyond Tarot card readings.)

Initially, parallel story lines concern Peck’s search for his mother while Gabe faces charges for the murder of a young man. Both are intriguing, but the latter is so quickly resolved that it seems like filler or a stand-alone short story, rather than an integral element of the novel. Peck’s quest is the story’s main focus, with tension building the closer he gets to uncovering his past.

Antil creatively brings his characters alive through believable dialogue, spot-on mannerisms and evocative physical descriptions. Descriptions of the people and places Peck sees along the way are equally impressive. Unfortunately, the ending is somewhat of a disappointment, wrapping up loose ends, including the fate of Peck’s childhood abuser, with only cursory explanations.

Nonetheless, this is a lovely story about the strong bonds of friendship that often supplant family ties. Readers will enjoy this engaging offering.