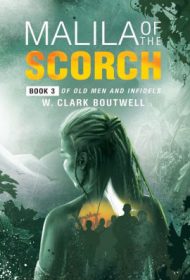 A post-apocalyptic thriller set in the near-future, the third installment in W. Clark Boutwell’s Of Old Men and Infidels’ saga (after Outland Exile and Exile’s Escape) revolves around Malila Chiu, a badass, truth-seeking heroine at world’s end.

Chiu was formerly a pharmaceutically sedated and culturally brainwashed resident of the Democratic Unity of America, a nation with radically advanced technology. Now she has escaped its clutches and is presumed by many to be dead. As the Unity plans to invade the Restructured States of America (RSA), its ruthless leader Lieutenant General Eustace Tilley Jourdaine makes it a priority to find Chiu.

But Chiu is lost in the Scorch, a vast wasteland inhabited by sentient plant-like beings. One of those beings, Splanch, rescues Chiu, and the two forge an unlikely bond. Chiu eventually agrees to travel to the RSA to warn its populace of an imminent invasion and to facilitate an alliance between the RSA and the beings of the Scorch. Accompanying her is Jesse Johnstone, an old man whose adventures in the outland are legendary.

Unfortunately, much of what made the previous two novels so extraordinary is missing from this installment. While some bridge books (middle novels in a series) can stand alone, many cannot, having unclear backstories, unremarkable beginnings and unsatisfying endings. This novel is among the latter. Boutwell’s focus on world-building and trademark social commentary are conspicuously missing. Instead of rich description and visionary world-building, attention is on advancing the plot—moving major chess pieces around on the narrative board.

While there’s still much to enjoy in Malila of the Scorch —a subplot regarding the use of computer interfaces is fascinating—the magic, at least temporarily, has disappeared. Boutwell had much to say in the first two novels, offering brass-knuckle social commentary; readers came away looking at themselves and their world differently. In this novel, the brass knuckles have been removed, and readers will finish the book hoping for more in the next installment.