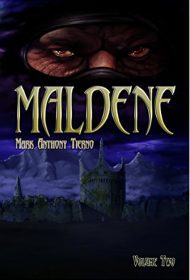 The setting, characters and central conflicts first broached in Maldene: Volume One occupy an even more intricate canvas in this installment, as the author dives deeper into his imagined world of Maldene, its epic battles between good and evil and its larger-than-life baddie, an ancient villain named Miro.

Once again, the story takes place on a faraway planet that boasts an alien cosmology and a varied cast of creatures familiar to any fantasy fan: ogres, elves, wizards and bad guys straight out of classical mythology. Once again, the young wizard Sabu and his band of companions set out to find clues that will serve them in their looming battle against Miro, a bad guy for the ages whose ultimate aims remain carefully cloaked in Tierno’s second volume.

Even as the protagonists comb ancient relics and encounter a broad cast of characters in prepping for an ultimate showdown, the author keeps some critical information a mystery, namely the true intentions of the book’s larger-than-life baddie. At the same time, Tierno takes the heroes into a diverse array of settings and environments and supplements the narration with maps and appendices detailing alien languages and imagined history.

Although the sheer amount of information and detail can sometimes get in the way of the action, Tierno remains a dynamic storyteller across the book’s considerable breadth. It seems likely that the author will pen plenty more pages to resolve the questions left unanswered in this volume.

Tierno has ambitions to match Robert Jordan’s epic Wheel of Time series, a saga that spanned thousands of pages and ultimately outlived the life of its original author. Readers with the patience, dedication and time to undertake this narrative adventure will find plenty of reasons to remain curious and engaged in this tale of the richly imagined world of Maldene.