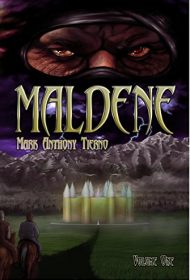 Mark Anthony Tierno shows his remarkable ambition in the sheer scope of his fantasy epic Maldene, the first in a series that, as the author points out in an online description of the saga, runs longer in its first two installments than Tolkien’s entire Lord of the Rings series.

While Maldene is just the beginning of a longer tale, Tierno establishes the narrative terms for the epic to come, using the first book to vividly set the stage on Maldene, the titular alien world with three moons and a blazing blue sun. Maldene plays host to elves, ogres, wizards, dragons and Miro, an ancient, terrifying villain bent on an evil plot.

Miro’s status as an epic villain is revealed relatively early, but Tierno keeps the character’s true aim somewhat mysterious across the first installment. Instead, the author introduces us to the heroes dedicated to defeating Miro’s ostensible plans. The young wizard Sabu, his elven friend Eldar and a brave group of companions hunt down a fierce dragon to begin their quest to bring down Miro. That effort continues with a series of ever-more challenging hurdles for the heroes, and offers the author opportunities to delve into the vast stretches of his imagined world.

Tierno has carefully plotted out every corner of Maldene: Through supplementary maps and notes about the languages, races and ancient history of the planet, Maldene becomes a character of its own. With an obvious background in science, the author describes the planet’s equatorial regions and unique funnel storms with alacrity. The author’s dedication to deep detail extends to his characters, both good and evil.

This strength can also be a weakness, however; between the alien measurements, languages and topography, the actual action sometimes becomes a bit muddled.

Nevertheless, the novel offers a rich bridge into what’s obviously a more involved story in the volumes to come—a carefully described and painstakingly detailed adventure tale that will leave even fans of Tolkien impressed.