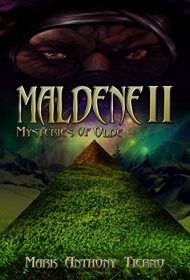 Mark Anthony Tierno’s two-part, first installment of his epic fantasy series ran more than 1,000 pages. The latest installment, Maldene II: Mysteries of Olde, is “bigger than the entire Lord of the Rings trilogy,” he notes, as it seeks to expand the characters, action and magic of the first book while forwarding an ambitious storyline.

That story follows the varied cast of fantastical heroes who steered the first book. Led by the human wizard Sabu, this band of protagonists includes elves, dragons, ogres and other races unique to Maldene. Again, they’re on the trail of Miro, a villain who defies easy description. Ancient, enigmatic and powerful, Miro’s aims and intentions remain cloaked in mystery, but it’s clear they could sway the fate of the entire world of Maldene.

Sabu and his allies must piece together Miro’s true intent from a map discovered in the previous books. With “the apparent indestructibility of its paper, the durability of its ink and a thousand other details,” the document boasts mystical properties of its own.

From an island redoubt populated by dragons, ogres, elves and other creatures, the heroes pursue Miro across a world on the brink of global war. Meanwhile, readers gain intimate access to Maldene’s mythology, history and populace; it’s a world so intricately imagined that the author includes appendices covering everything from Maldene linguistic keys to a genealogical chart of the world’s races.

That depth may be overwhelming for casual readers, especially those who haven’t read the first installment. Between learning the nuances of Maldene’s language, geography and laws regulating its magic and physical properties, it can be challenging to remain focused on the underlying good vs. evil that drives the story.

But for those with the patience to learn the ground rules—and to overlook occasional punctuation miscues— the author includes plenty of gripping action and multifaceted characters that hum with life. In fact, Tierno’s investment in his world can be infectious.