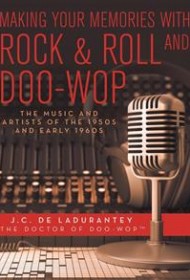 The subtitle to J.C. De Ladurantey’s engaging book explains the content succinctly: The Music and Artists of the 1950s and Early 1960s. De Ladurantey, who has trademarked his nickname “The Doctor of Doo-Wop,” is an oldies DJ and concert promoter in Southern California who is finally living his dream: playing the music of his youth, after a lifetime of just being a fan.

De Ladurantey is not a music critic and says so upfront. He’s not writing an academic treatise about the roots of rock or the social impact of the music on his generation. The book is a celebration of his nostalgia, and the nostalgia of others who grew up with the first wave of pre-Beatles Top 40. Delivered in an oversized, coffee-table book format, it captures fleeting thoughts, favorite moments, bits of lyrics and bars of melody. The author presents lists—lots of lists—throughout: best fast and slow dance songs, most romantic songs, best falsettos, the qualities for evaluating a great song, artists who’ve died… and, well, you get the idea.

Along the way, he squeezes in trivia and historical factoids. In the chapter titled “The Name Game,” for example, he lists the real names of the stars of the era. Johnny Otis is so much hipper than Liannis Alexandres Veliotes.

If there’s a weakness here, it’s De Ladurantey’s self-promotion. The book’s title is his radio show, and he mentions it often, and most of the photos show him posing with the oldies stars he presents in shows. Publicity shots of the artists in their prime would be more compelling.

But that’s a small gripe if you identify with the burning drive that led De Ladurantey on his late career of doo-wop discovery: He writes about exploring record stores in his youth and even today, and says, “I would purchase an entire album just for the one song that brought back that memory.” If you’ve done the same, you’ll appreciate this book.