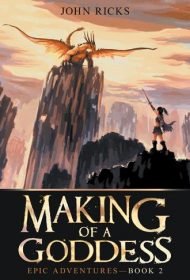 John Ricks weaves a tale of adventure, ambition and moral ambiguity out of the ashes of utter destruction and hopelessness in his fantasy adventure, Making of a Goddess.

The novel opens in the wake of devastating attacks by fantastical creatures. Dragons have decimated the imagined world of Landtrap, a place where magic, monsters, demons and wizards are commonplace. Among the hordes of humans traveling to the northern city of Farnorth is Samantha, a half-demon, half-dragon who has her own grudges to satisfy.

Once arrived in the walled city, Samantha (daughter of a “platinum dragon” and a “male succubus” with magical powers) draws the scrutiny of Queen Iseaia Danberry. Samantha uncovers plots and conspiracies in the court, and is quickly offered a task: to cleanse an abandoned tower of lingering evil creatures left by a dead wizard.

This task is only the first in a series of adventures for the protagonist, one that includes magical trees, generals of mighty armies and regents with questionable motives. As forces of good and evil muster for a grandiose battle, Samantha must decide where her true loyalties lie while discovering clues about her own roots and powers that will steer her future.

Samantha’s interactions with a host of different characters, challenges and foes makes for a varied narrative landscape. Given the story’s relatively short length compared to major fantasy sagas, this gives the novel a more superficial bent, rather than making for a profound or detailed offering.

Ricks revels in familiar fantasy tropes and structures. In addition to some stock characters and monsters, the story’s language and imagery are steeped in the world of role-playing games (the constant string of spells, magical items and artifacts will feel familiar for any veteran of a Dungeons and Dragons campaign).

It all makes for an enjoyable, albeit sometimes shallow, spin on familiar fantasy fare—one that delivers numerous elements that fans of the genre may appreciate.