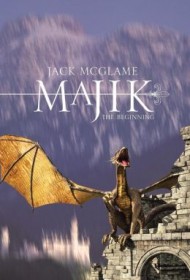 In this work of juvenile fiction, a young court magistrate wants nothing more than to escape the humdrum world of politics and royalty and become a wizard. To do so, he must forge new ties and overcome old fears.

Author Jack McGlame has a clear sense of character and plot, and can bring the fantastical to life, as when best friends Wilhelm and Tibed explore the Hidden Valley of Majik, finding newborn dragons and games where life and death hang in the balance. He’s even included two board games at the back of the book that are themed around the story; both require the reader to photo-enlarge the board and make pieces, but they look engaging and allow the reader to continue the story when the book ends.

Majik falls short, however, when McGlame misuses words (“reigns” for “reins”, for example), and writes dialogue that meanders around a topic without actually saying anything. “ ‘I am sure there is enough of Majik to go around, rarely the same, always a game. No matter what I do, I am to start at a beginning. No matter the start or finish, the result is always the same. Only the real magic is revealed in every play of the game,’ I concluded.” Much of the talk is like this, and it stalls the story instead of moving it forward. It’s also frequently unclear who is talking, which only adds to the confusion.

This could be a fun fantasy novel, but a book aimed at young readers needs careful editing for grammar and usage, along with tighter plotting to keep their interest. As written now, Majik: The Beginning has lots of potential and a great friendship at its heart, but it needs polish to bring these things to the fore.