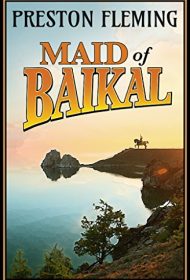 The Russian Civil War between Lenin’s Red Army and the White Army led by Admiral Kolchak broke out after the Revolution of 1917. The Bolsheviks triumphed over Kolchak in 1919, although the Red victory was not assured until the Soviet Union, under Lenin’s leadership, was formed in 1922.

But what if Kolchak had won? In Maid of Baikal, Preston Fleming offers an alternative history with the White Army prevailing through the efforts of the titular fictional character, the Maid of Baikal, Zhanna Dorokhina.

An intriguing protagonist, Zhanna is an 18-year old country girl who hears the “Voices” of saints sending her messages from God. The Voices tell her she has a vital role within the White Army and give her messages to deliver personally to Admiral Kolchak. The novel follows Zhanna’s journey from farmer’s daughter to army general, as she attracts a fanatical following but also doubters who ultimately threaten her life and liberty.

The detailed narrative is well-grounded in research (footnotes are included), and displays a thorough understanding of the conflict. Zhanna’s story and the web of battles, intrigue and in-fighting that occur are told largely from the viewpoint of Ned Du Pont, an American soldier who follows Zhanna’s progress, either aiding her or as an interested spectator. Unfortunately, he’s not present when her story reaches its tragic climax—a missed opportunity to convey the emotional drama of his reaction. Additionally, for a lead character, he too often plays a passive role.

Fleming uses dialogue to offer updates on complex troop movements and political discord—and largely succeeds. But the wealth of detail can be overwhelming. And while Zhanna, Admiral Kolchak and some of his men, notably the crafty Lebedev, are well-realized, other characters are less so, and the novel’s pace slows when Zhanna is absent from the page.

Some readers may feel the author focuses on historical detail at the expense of the story’s emotional resonance, but Maid of Baikal’s in-depth portrayal of this pivotal time should appeal to those interested in military history or Russia in the early 20th century.