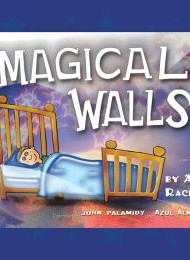 In the story, Mike’s mother gets wallpaper to decorate his room. Once the walls are lined with pictures of cowboys and Indians, sailors, pirates, sports heroes, and more, these characters seem to spring to life when Mike goes to bed. As Mike grows older, the walls lose their magical ability, until, at book’s end, he has his own children and there’s a hint that they will have magical walls of their own.

It’s not clear whether Mike is imagining these things, with the wallpaper images as inspiration, or whether, as the book’s title might indicate, the walls are really supposed to be magical. An illustration of a circus scene is accompanied by these words: “Little did Mike know that at night the walls would begin to glow. And out would step a three-ring circus show.” This implies that Mike isn’t bringing the characters to life himself, but a couple of pages later, an image of a marching band is enclosed in what seems to be a thought balloon above a fully awake Mike, which would seem to indicate that he’s the prime mover.

The illustrations are excellent, using a blend of cartoon style characters and realistic Photoshopped backgrounds. However, they can’t quite overcome the book’s writing flaws. Written in rhyme, the seemingly random number of syllables from one line to the next makes it difficult to fall into a steady rhythm while reading, for example: “Then one night when Mike was much older, the glow of the walls began to smolder.”

“Smolder isn’t really a good fit by definition, but it does rhyme—one of several instances where syntax is convoluted or meaning stretched for rhyme’s sake.

Magical Walls is a cute, well-drawn book, but more attention to the writing would have made it even better.