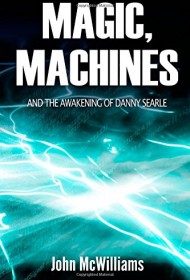 The unconventionality and sheer unpredictability of this hard science fiction novel makes it a page-turner.

While traveling to Kennedy Airport and, from there, to Chicago to make a presentation on their groundbreaking work in artificial intelligence, the members of Long Island-based Quantum Bay Labs’ Prometheus project are involved in a car accident that kills the driver and puts the company’s beautiful bookkeeper, Danny Searle—the one with mesmerizing blue eyes—in a coma.

Ever since being hired by company CEO and world-renowned scientist Aiden Cipriani 18 months earlier, the mysterious Danny has enthralled all of those around her; she is a gifted prestidigitator, having worked as a magician’s assistant in Las Vegas; is a surprisingly astute business administrator; and her joie de vive is contagious. Cipriani’s son, Tyler, a programming prodigy whose work plays an integral part in the Prometheus project, is completely taken by Danny and her belief that the world is filled with real magic.

But with Danny in a coma and in danger of losing her brain functionality, Tyler’s programming expertise is put to the test as he races against time to somehow save her. However, Danny’s mysterious past, once uncovered, changes everything.

The story is driven by a highly intelligent and witty narrative voice, excellently developed characters, and a relentlessly inquisitive undertone: The elder Cipriani’s numerous lectures, for example, (such as how the subconscious mind enables the conscious mind to see) are absolutely fascinating.

There are a few issues, namely the novel’s less-than-climactic ending, and some plot twists that test the boundaries of believability. But these are minor problems overall.

The author’s inspired take on artificial intelligence is commendable. Instead of exploring the clichéd path of “thinking” machines, Prometheus is described as gray pudding, “a bowl of thinking stuff” with wires attached.