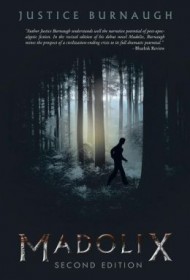 Author Justice Burnaugh understands well the narrative potential of post-apocalyptic fiction. In the revised edition of his debut novel Madolix, Burnaugh mines the prospect of a civilization-ending crisis to its full dramatic potential.

The catastrophe kicks off from the vantage point of Allan Brandt, a teenager living with his mother in the small town of Westcliff, Colorado. The mother-and-son pair have relocated to the Rockies from Georgia after the tragic death of Brandt’s grandfather in a car crash. Allan’s mother has taken a job as the proprietor of an antique store, and he’s haunted by a recurring nightmare populated by faceless monsters.

That vision isn’t the only hint of the crisis to come. Westcliff is among towns across the globe hit by a series of blackouts and eerie light flashes in the night sky. Those signs are just a preface of what’s to come.

A mysterious army arrives in Westcliff in a “fleet of sleek airships.” Seemingly human soldiers emerge and round up scores of the sleepy town’s citizens, including Brandt’s mother. Meanwhile, he stows away on one of the ships, intent on rescuing his mother, and discovers the enemy isn’t as human as he suspected. The invading armies are from an alien world called Madolix, and they’ve had their eyes on earth for millennia.

Burnaugh’s story incorporates elements of science fiction, fantasy and gritty realism, all of which come together through the author’s detailed and thorough narrative style. Some of the metaphors work better than others, and Burnaugh tends to rely a bit too heavily on the passive voice. Still, the action moves with an obvious care for pacing that keeps the post-apocalyptic tale from getting too weighed down with its gloomy premise.

At its heart, the story revolves around a son’s quest to save his mother. That basic premise is bound to appeal to all kinds of fiction fans, in addition to the book’s obvious audience of fantasy and science fiction aficionados.