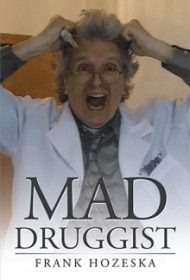 In his debut novel, pharmacist and amateur comedian Frank Hozeska offers a messy comedy of errors about a well-meaning but disaster-prone pharmacist.

In the opening, newly minted pharmacist Louie encounters a huge ball of celestial fire. To his mother’s skepticism, Louie argues that it’s a benediction from heaven. “Ma, why would God throw a huge ball of fire at me and bring me to my knees for nothing?” Louie asks.

Next readers experience Louie’s teeth-gritting, tone-deaf sense of humor as he follows the same repetitious arc, over and over: He gets hired at a pharmacy, does something stupid, rages at the “ungodly hypocrites” who fired him, takes his temper out at the gym and reminds himself, “God had better plans for me anyway!”

As the story unfolds, Louie develops a speech impediment after a visit to the dentist, gets into fights with romantic rivals, is robbed at gunpoint, survives an earthquake and is eventually blackballed from the drugstore trade for his bad behavior. At his lowest point, Louie lashes out: “Yeah, I’m mad and I lost my mind! I’m the mad druggist!”

Overall, the situational humor falls flat, but the larger problem is that Louie is a deplorable protagonist. He’s the epitome of unprofessionalism, altering prescriptions at will, dancing in the pharmacy and infuriating co-workers and supervisors. Worse, he’s an unapologetic misogynist who lacks the emotional capacity to recognize his wrongs. It’s hard to identify with a hero who encourages his customers to have more sex, pretends to be a Hollywood producer to pick up women and thinks nothing of telling a female co-worker, “You’ve also got the bod Maria.”

Even if one argues that his humor reflects a different age, modern readers are unlikely to appreciate Louie’s self-destructive, off-putting behavior. Add in unresolved plot threads, a raft of grammatical errors and a jarring, preposterous ending and there’s little to redeem this provocative but distasteful yarn.