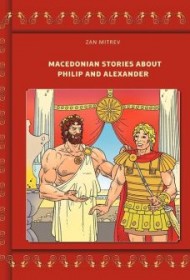 Courage tempered with wisdom is the keynote of Zan Mitrev’s accounts of ancient kings in Macedonian Stories about Philip and Alexander. Told in a consistent, slightly formal voice verging on stiltedness that nonetheless suits the legendary nature of the material, Mitrev delivers eight stories chronicling key moments in the lives of the father-and-son rulers.

Each story is a retelling of a legendary exploit, and each offers a lesson. For instance, in “The Power of the Oro,” King Philip finds it challenging to get thousands of troops – who are armed to the teeth with shields, swords and the like – to move in concert on the battlefield. But then he attends wedding festivities and remembers how all people in the region know how to dance the Oro. When he instructs his warriors to move as they would in certain segments of the dance, they achieve great tactical success.

In “The Best Ally,” Philip shows his son Alexander a unique method of how to prevail on the battlefield and then mystifies his men with orders to polish their shields and position themselves in a messy marsh. When the enemy approaches, their horses are blinded by the glare from those shields, giving Philip’s troops the advantage.

Other stories take on more military tactics, including the effort to win without casualties, as well as lessons about the problem of pride, power of patience, endurance of love and the notion that no enemy is invincible.

Opening phrases that seem hackneyed in other contexts, such as “Once upon a time” and “In the olden days,” actually work here to open the door on larger-than-life stories that occur in, yes, “olden” times. But the final story, “Love Conquers All,” delivers too many clichés, which ultimately weaken the piece.

Overall, these retellings of legendary tales may stir the imaginations of middle school readers. Igor Jocevski’s illustrations give past heroes an air of modern, extremely muscular superheroes – an effect likely to appeal to contemporary boys.