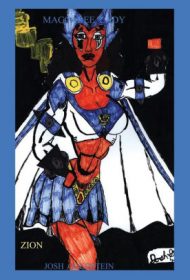 Author and artist Josh Goldstein kicks off his latest graphic novel with an ambitious mission statement. He writes in his introduction that, unlike the first volume detailing the exploits of the Israeli superheroine Maccabee Lady, Zion strives to be more political and focus more finely on current events. The ten short stories featured in this second installment include global action and feature personages from international politics, he notes.

Unfortunately, this collection falls short of its mission, lacking any profound political statements or incisive observations. Instead, Goldstein offers a series of exceedingly basic superhero stories, vignettes of 10 to 15 pages centered on an unfortunately one-dimensional and highly sexualized heroine. The brief references to politics are, more often than not, outdated and unclear.

In one, Maccabee Lady and her ally Nails quickly and violently do away with bank robbers before celebrating in bed. In another, she battles “The President,” a Barack Obama stand-in who threatens an Israeli settlement. In Episode 9, Saddam Hussein is the featured supervillain; the deceased dictator has somehow come back to life and taken over ISIS.

None of these tales offers much in the way of detailed backstory or explanations. The text is sparse, and the drawings are focused mostly on violence or sex. The artistry is raw and unpolished, and the overall effect is more puzzling that thought-provoking.

Goldstein is heartfelt in his tributes to his heroes, artists like Bill Tucci and James O’Barr. Unfortunately, the story’s execution lacks refinement, and graphic novel fans will most likely be left scratching their heads in confusion.