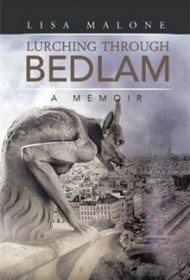 Brimming with sass and attitude, Lurching Through Bedlam follows the author as she chronicles her many misfortunes. Written as a sequel of sorts to her first memoir, Pate De Foie Gras, this brief volume details the darker circumstances of the stories related in the first book.

Readers are taken into Lisa Malone’s life as a military child as she travels from Tripoli to Maine, and eventually Colorado. Throughout, she battles depression and suffers the wrath of her emotionally abusive mother, who, the author writes, “could be ruthless, unleashing a vicious temper whenever she felt offended or cheated, which turned out to be quite often.”

The rest of the memoir recounts Malone’s scandalous adult life, which includes unfulfilling jobs, passionate affairs (including one with a newly married man), numerous suicide attempts when in the throes of depression, a stint at an “insane asylum,” and an unhappy marriage to a man who had a habit of exposing himself to children. These dark passages are often sharp-tongued and abrasive (i.e. the book’s last line reads: “I am who I am, and anyone who doesn’t like me can goat fuck himself”).

Malone certainly has a talent for writing. Her knack for appealingly blunt descriptions and vivid detail (“I wadded up his shirt and flung it into the oil-slimed gutter where it floated like a ragged jellyfish”) brings her stories to life. But while her knack for description is commendable, the narrative lacks depth, particularly in the latter half when she meets her future husband. While a simple, straightforward style may help portray the author’s frank voice, her blunt, detached attitude and lack of personal reflection on the scandalous events she recounts make her memoir seem more like a rant against those who have wronged her, rather than the offbeat, colorful story it has the potential to be.

The interesting details Malone provides are engaging, but ultimately, her lack of exhibited self-awareness will turn many readers away.