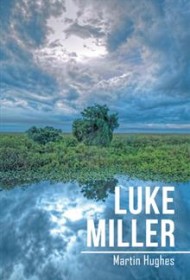 In this action-packed thriller, 15-year-old Luke Miller grows up fast as he confronts the evils of both man and nature.

Luke is experiencing the usual teen-age angst at Everglades City’s high school when he becomes the target of a school bully. As the conflict escalates, Luke is falsely accused of hurting another student.

Frustrated and suspended from school for a week, Luke kayaks to his secret hiding place in the Everglades unaware of threatening weather. When a hurricane hits, Luke barely survives nature’s assault. He washes up on the banks of an illegal animal slaughter farm, where a gang of criminals is not only cruelly killing sick animals, but also planning drug and bomb operations. Luke’s bad luck is far from over—he’s forced to help a second gang of criminals break into the farm, if he ever hopes to get back to Everglades City.

Luke’s story is only one small piece of this plot-heavy book. In relatively few pages, the author also takes on rogue law enforcement officers, an assassination attempt on the U.S. vice president, a devastating hurricane, and gang warfare. While he manages to tie all the pieces together, the book often seems more focused on grisly details than plot development. To wit, Victoria, the sadistic woman in charge of the farm, tortures any intruders before allowing a pen of hungry boars to rip their live bodies to pieces. Likewise, Luke’s gang of thieves may be nice to him, but they have no qualms about cutting off Victoria’s fingers.

Luke is not a particularly likeable hero—he has his own anger issues— and his encounter with the second group of thieves strains credibility. Still, that’s not unusual in these kind of plot-heavy thrillers, and the book shines in one area: Its depiction of the deadly force of the hurricane proves once again that the power of man is no match for the power of nature.