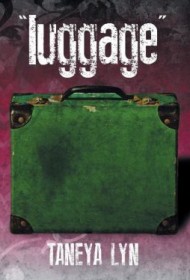 Non-English speaking Europeans often use Hollywood movies to learn the subtleties of the language and the nuances of U.S culture. This strategy has its benefits and pitfalls, as Veronica, the leading character of “luggage,” so quickly discovers.

Growing up in Poland, Veronica cobbles together an image of the United States by watching such flicks as Dirty Dancing, where the girls are thin and cute, the guys come with six-packed abs – and where even a waif can become a princess. Immersed in this version of the American dream, Veronica and her girlfriends decide to vacation for the first time in the U.S. The story takes off as they arrive in New York City.

Author Taneya Lyn’s diary format creates immediacy, giving readers a visceral sense of the torrent of emotions Veronica, with only a modicum of English skills, feels as she cycles through terror, agony, depression, fear and ecstasy on her way to finding food, lodging and companionship. The author chronicles the depth of her feelings so vividly it often feels as if Lyn has given us a direct pipeline to Veronica’s consciousness.

Unfortunately, “luggage” tells us far more than we want to know. While we want to care about Veronica, we risk drowning in the minutiae of her thoughts, which include endless details about disapproving parents, bratty girlfriends, and unfamiliar customs. In addition, the author’s sentences beg for better construction. Some word missteps, such as using “color glasses” for “rose-colored glasses” can easily be forgiven. However, Lyn’s narrative often goes on for pages without a paragraph break, and with no clear timeline — making reading dense and exhausting.

With thoughtful pruning, “luggage” has the potential to move readers. Without it, many readers, unfortunately, will probably abandon its pages mid-stream.