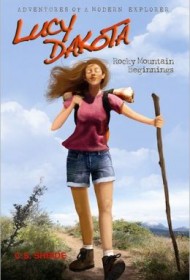 In this heartfelt but flawed first book in a young adult adventure series, Colorado teen Lucy Dakota pushes past her fears and grows more self-assured during a life-changing trek into backcountry.

From middle school on, Lucy has struggled to feel accepted and proud of how she handles things. She’s lonely, at times overweight, and passive when her best friend bullies her and boyfriends pressure her to take drugs. This should rouse empathy, but author C.S. Shride doesn’t delve far enough into Lucy’s experience to win readers over. Told with little dialogue or use of secondary characters to offer outside perspective into Lucy’s character, those first chapters set up Lucy as a complainer rather than a heroine.

By the fourth chapter, though, Lucy signs up for a scouting club and her adventures begin to pull readers in. She takes a hairy ride down rapids, for example, and dodges a falling boulder during a climb. Then at age 17, Lucy enrolls in a 25-day wilderness course near Durango, and the story kicks into full gear. Shride, an adventure guide, details the course so well that readers will feel that they, too, can tie slings and wield ice axes. And she offers gripping scenarios: a cougar prowling around Lucy’s tent; Lucy rappelling an 80-foot cliff.

Despite these moments, however, our hearts rarely pound. Too often readers must rely on what Lucy tells them, rather than observing her and the reactions of others. Although dialogue picks up during a crisis, it often loses its momentum, and characters fade in and out, never adequately developed. Moreover, Shride seldom describes the outdoors in an original or penetrating way.

Still, the last section is compelling; Lucy’s challenges make us want to test what we’re made of, too. This is a book that simmers with potential — a story we want to love even as we’re kept at arm’s length.