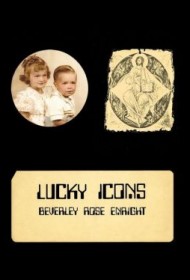 Lucky Icons, by Beverley Rose Enright, is a substantial poetry collection divided into traditional-sounding sections, such as “Icon Poems” and “Sonnets To The Psalms,” and delightfully titled sections such as “Extinct Birds,” “Calculus Sonnets,” and “Art, People, & Math.” The author will delight readers with her fresh imagery and attention to detail.

Many of the pieces in the “Icon Poems” section include interesting textural imagery, such as in “Old Testament Trinity,” which begins, “If I peel away with knowledge, skill, and care, / each of the blackened varnished layers of centuries / of repaintings on the icon of my faith, Rublev,” and in “Saint John The Forerunner,” which creates fascination through archaic items and unusual actions: “[C]lothed in a shirt of camel hair,” and “lean from eating insects and honey.”

Enright covers various topics and ideas aside from the religious, most notably utilizing nature for the focus of many of her poems, as well as for metaphors and imagery. In the invitingly titled poem, “Forget Mapplethorpe And ‘Consider the Lilies,’” she assumes a Romantic-era tone and syntax to create a close-up of these flowers: “Entranced was I by a hibiscus’s come-hither tongue, / A blowtorch of pollen and pistil to flagrantly spark / From trumpets of petticoat petals that rustle among / The fig leaves of green gushing over no intimate dark.”

Personifying the hibiscus as a seducer, employing the surprising industrial metaphor of a blowtorch to enact botanical sexual reproduction, and combining sound and shape (trumpets) to describe the movement of flowers is all proof of Enright’s ability to marry sound and sense as a poet.

The poetry suffers in a minor way from the author’s use of inverted syntax, such as “Entranced was I” in the aforementioned poem. This structure often feels contrived and reduces the freshness of the language found elsewhere.

Overall, however, this is an engagingly learned and thoughtful book that will appeal especially to those fascinated by the secret life of the natural world.