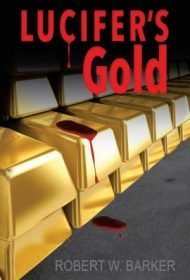 In this action-packed thriller, a sequel to Robert W. Barker’s Nuclear Rogue, a geologist gold explorer and his lover are pursued across the globe as they strive to uncover a suspected gold mine conspiracy that ultimately could threaten the U.S. government.

Peter Binder, a geologist and former SEAL, and Maria Davidoff, once a Russian spy, agree to investigate a gold mine on a remote Indonesian island to learn if it’s truly the richest ever, as the mine’s owners claim, or simply a ruse. An advisor to the U.S. president has secretly requested their help because he suspects conspirators deep within the United States government are plotting to use that gold to create a rogue dictatorship within the U.S.

The couple not only faces deadly threats from that group, but also from a Japanese gangster and a dangerous Russian spy, each of whom have their own nefarious plans for the gold. What’s more, Peter and Maria have trust issues because they hold their own deep-seated secrets.

This well-structured book, set in current times, is packed with non-stop threats, twists and turns, thrilling actions, and narrow escapes as Binder and Davidoff dash from Canada to Indonesia, Switzerland and Asia to complete their assignment while dodging violence.

Throughout, Barker’s writing style is straightforward and compellingly spare. After a bad dream, for example, Peter reflects, “It was always the same dream. The same bodies and the same blood. Always the same man, in the shadows. Peter could never quite make out the details of the man’s face.”

Unfortunately, the main characters are emotionally flat, making it hard to invest in their well-being. Additionally, their relationship—unusual in that Maria was previously an agent for the Russian intelligence agency assigned to kill Peter—isn’t revisited through flashbacks to give readers new to the series a fuller backstory.

Despite such issues, Lucifer’s Gold is an imaginative thriller brimming with intrigue and action that fans of the genre are sure to appreciate.