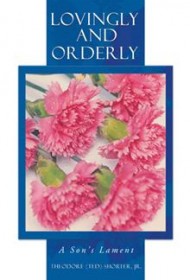 The genesis for Ted Shorter’s Lovingly And Orderly was the death of his mother, Pauline, in 2000. Perhaps equally sad was the aftermath, as Shorter and his four siblings became locked in a probate dispute over Pauline’s meager estate — a house on Chicago’s West Side, a few thousand dollars and her personal items. The years-long fight tore the family apart.

Shorter levels a variety of serious charges against his brother and three sisters: forged documents, a fraudulently obtained bank loan, perjury, conspiracy. As the case winds through the Cook County courts, he adds the Chicago Police Department, several judges and lawyers and a large Chicago-based bank to the list of those he felt conspired against him. As such, Lovingly And Orderly often seems less a remembrance of his mother – Shorter’s stated intent – than an ax-grinding.

Shorter, obviously an intelligent man, relies too much on negative, even hostile, language: one sister “deviously” decides something; there is “incessant scheming”; another sister makes “asinine statements.” His writing sometimes is also convoluted (“My mother had to go to the emergency room after we celebrated her birthday at her late half-sister’s house on the far West Side of Chicago, named Sally.”)

In addition, the book is repetitive in the extreme. Shorter rehashes what he believes are the merits of his case in nearly every chapter, and he describes his siblings’ behavior — their “ghoulish” plot, their “dastardly crime” — in detail just as frequently. Shorter also offers numerous Biblical quotes and allusions to America’s civil rights struggles and slavery to support his case.

And as for the case itself, it’s difficult to determine who is right. The author presents only one side, but his repeated setbacks — one lawyer declined to take the case, he fired another after the attorney in his view sided with his sister, a string of judges ruled against him — makes one believe there’s more to the story than the reader gets in this telling.