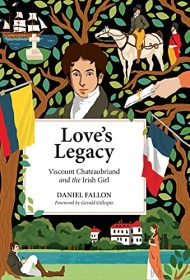 In Love’s Legacy, Daniel Fallon embarks on “an earnest quest…into lives from a time long gone,” to prove that the French writer and diplomat, Francois-Réne de Chateaubriand, was one of his ancestors.

According to Fallon’s family tradition, Mary O’Neill, a maternal ancestor who had “lived in London sometime in the 1790s” had befriended Chateaubriand when he was in exile from the French Revolution, arranging for him to live with her family. The grateful Chateaubriand had, in return, promised to pay for the education of her first-born son.

Years later, Mary and her husband, Patrick Fallon, asked Chateaubriand to fulfill his promise, and he arranged for Thomas Fallon to be “sent to the College Royal of Amiens, France.”

Skeptical that Chateaubriand would pay for Thomas’ education simply due to that promise, Fallon begins research to prove that Chateaubriand was actually Thomas’ father. Fallon reviews two letters from Chateaubriand that he inherited from his father. One listed some clothes the diplomat sent to Thomas. The other gave Thomas permission to visit friends over the holidays. Subsequently, the author consults numerous sources, including birth and death records, police and tax records, the papers and letters of Chateaubriand and Chateaubriand’s biographers and Chateaubriand’s own autobiography. He concludes by purchasing three DNA analyses proving that he (Daniel) could not “share paternal ancestry with men named Chateaubriand.”

What makes this study interesting is the author’s approach. “The reconstruction of a life from long ago,” he states, “is inevitably at least partly an act of imagination.” It’s Fallon’s imagination that lets him shape his discoveries into support for a lineage from Chateaubriand. It’s his imagination that lets him conclude that “knowing personal stories about people who lived before us, whether biological relatives or strangers, can be a powerful force in shaping our own identity.”

Fallon’s Love’s Legacy is as much a story about the questor as it is about his quest. It should appeal to any reader interested in history and genealogy.