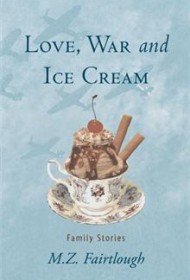 Harry Fairtlough grew up in the tiny village of Blandford St. Mary, England, the son of a British army general who died before Harry could know him. Harry attended private schools and lived in a manor house with his mother and three older siblings.

Marina Campo was raised in the sunny seaport of Cadiz, Spain. Her parents had emigrated from their poor, tiny village in Italy to open an ice cream shop, which became wildly successful.

When Harry marries Marina in 1965, these two vastly different families come together for all time. On one side of the aisle, there is happy noise and enthusiasm, while on the other, the British relatives sit in genteel reserve, restrained in their feathered hats, beautiful clothes, and tightly crossed feet.

In this superbly written memoir of two families who represent vastly different cultures, the author, with obvious love and respect, shares some of each family’s stories, vignettes that characterize the lives of each group.

Readers will fall in love with the whole bunch of Fairtloughs and Campos, even the bitter Arturo, Marina’s father, whose dream of returning to Italy was deferred until it was too late. Not to be forgotten is Iole, Marina’s indomitable mother, the force behind all things Campo.

The author’s power of description is prodigious as she leads us up to the tiny mountainous village of Zoldo, Italy, then back down to the verdant fields of Blandford St. Mary and on to the sunny seaport of Cadiz. Enhancing the story are treasured family recipes, instructions for games, and some wonderful photographs.

This tender and often very funny account of diverse cultures coming together is rooted in the common ground of honor, duty, integrity, and love given freely and unselfishly, and it’s a lesson delivered timely to a generation in need of such examples.

The only thing wrong with this book is that it ends.