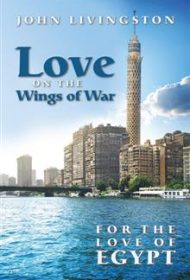 In Love on the Wings of War, John Livingston imagines an action-packed love story set in war-torn Egypt during the 1960s.

University student Nadia Kemal sets her sights on wooing American graduate student Mark Adams, a researcher in 18th-century Egyptian history. Nadia pursues Mark despite knowing that her conservative political family will object to their romance. For her, “To do something worthwhile is to rebel.”

The pair quickly fall in love, but as the couple’s relationship deepens, so, too, do their problems. The power vacuum that arises in the aftermath of Egypt’s defeat by Israel in the Six-Day War spawns a police state that foments distrust and fear among the populace. Amidst this tumult, Nadia’s father wishes to aggregate power—yet his daughter’s relationship with an American poses a problem.

Nadia and Mark secretly marry and prepare to leave the country, but when her father learns of their intentions, he puts Nadia in an asylum. Mark struggles to rescue her while facing threats and harboring his own misgivings regarding Nadia’s motives.

Livingston’s background as a Middle East scholar informs this tale as he skillfully weaves together Egypt’s sights and sounds with observations of Muslim culture. Without being overly didactic, he transports readers while infusing the romance with action and suspense. Although set in an exotic locale, his protagonists struggle with universal human conflicts.

Livingston’s colorful writing also effectively captures the incongruities Nadia notices, as when she laments of her family, “They are all talks and threats — pompous men, their empty minds stuffed like squash with their games of conspiracy and intrigue. Prick them and they pop like party balloons.”  Although the plot occasionally seems contrived, such as when Mark regularly escapes capture, readers remain invested in discovering whether Mark and Nadia’s love will endure.

An intriguing read, Love on the Wings of War depicts a couple caught in a cultural chasm and will particularly appeal to historical fiction buffs interested in the Middle East.