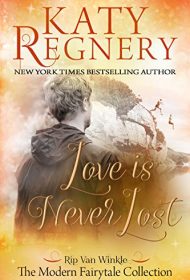 It’s 1985, and Rip has it all, including the town’s hottest girlfriend, Becky Holland. He’s best friends with Brom, another jock who, with Becky, torments Katrina Van Tassel, the fat, nerdy salutatorian whose mom died before she started high school. While Rip doesn’t intervene, he disapproves of their actions because Rip and Trina’s parents used to be best friends, and they all spent time together.

Rip and Trina are thrust together when doing community service after Rip convinces Trina to sell him beer while she’s working at the convenience mart, and they are caught. They rekindle their friendship, which seems to be leading to something more when Rip, drunk, jumps off the town lighthouse, ending up in a coma.

Flash forward 20 years later. Rip wakes up, and not only has the world passed him by, but Trina is now a hot doctor, divorcee and mother of a six-year-old girl. Though Rip and Trina have reversed places, Trina still holds feelings for him.

Regnery excels at character development. After his accident, Rip becomes more self-reflective, especially after a television reporter resists his attempts at flirtation: “And where women were concerned, it was especially hard to forget that he was no longer seventeen years old and hot [email protected]#$.” Additionally, young Trina is no stereotypical “ugly duckling”: She has a backbone, and Rip’s affection for her is believable.

The dialogue sparkles, with each character, even minor ones, talking in distinct ways, and Rip’s relationship with Trina’s daughter is believable and sweet.

In all, romance readers are sure to enjoy this modern twist on the classic story and will likely seek out Regnery’s other fairytales as they eagerly await the series next installment.