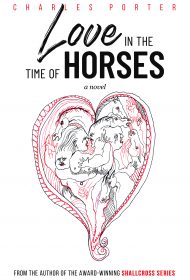 Love in the Time of Horses, by Charles Porter, is a literary character study with a contemporary western vibe. Set against the backdrop of dressage competitions in Palm Beach County, Florida, with detours to fast-draw gun contests, black-tie music recitals, drag shows, and backwoods boar hunts, it cleverly juxtaposes the refinements of the monied class and the adjacent brutality of redneck America.

Joel Katz, rich-kid, competitive gunslinger with a propensity for violence, is comfortable in both worlds. Joel aspires to improve his horsemanship, so his college buddy Walter (a football star turned drag queen) introduces him to Orin Kraybill and Orin’s wife Isabel, an unlikely power couple in the equestrian circuit. Orin, a gentle ex-Mennonite, forges an unlikely friendship with Joel. Meanwhile, Isabel, the elegant daughter of a Portuguese import-export mogul, hits it off with Joel’s girlfriend, a classical music prodigy named Jane.

Together with Walter, the five of them form a surrogate family revolving around horse competitions, art, music, and gun contests. But Joel cultivates more enemies than friends, with good old boys in the shooting circuit jealous of his upstart success. Inevitably, they’ll be gunning for him and anyone in his circle that might get in the way.

Porter contemplates powerful themes in his work—family estrangement, escaping bigotry, the salvation of love—but surprisingly little actually happens over the narrative’s course. Weighted heavily with esoteric dialogue about horse training, the novel feels like an authentic portrait of an interesting subculture, but it’s too much conversation at the expense of forward momentum. Characters arrive already largely developed and experience little change as they meander toward a violent conclusion, the shock of which is tempered by total foreseeability.

Porter has proven himself a fine writer in other works, and Love in the Time of Horses is populated with vivid descriptions and convincing dialogue. Unfortunately, it’s in the service of an underdeveloped story that never really fulfils the promise of his talent.