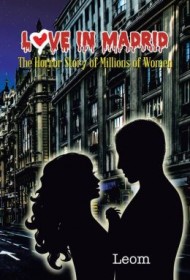 Love in Madrid: The Horror Story of Millions of Women is a novel set in modern-day Spain that tells the disturbing and graphic story of two sisters’ love lives combined with the author’s psychological musings on domestic violence.

Josepha is submissive to the demands of her psychologically twisted husband and yearns for his love. The husband dominates and sexually tortures her. Obsessed with violent fantasies of her death, he slashes her throat then kills himself.

Meanwhile Josepha’s sister sees her gallant, loving fiancée slaughtered in the Columbian streets. Shattered, she travels to Madrid to be with Josepha, meeting the handsome sculptor Sebastian along the way.  Once in Madrid, she finds that her sister has been murdered and meets a journalist who is making a domestic violence documentary. Their blossoming love is overshadowed by her unhealed heartache and his struggle to remain faithful to his wife.

While the characters are believable (with the exception of Josepha’s insane husband), the narrative confusingly jumps between characters.  In addition, the text is translated into English from an unspecified language and suffers from the occasional misused word and odd sentence structure.

Those interested in a study of domestic violence might find this a compelling read — but only if they are prepared for a disturbing, disjointed tale that depicts explicit violence and sex. Others will want to steer clear.