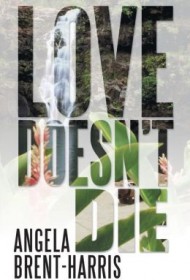 Angela Brent-Harris grew up in Jamaica in a warm and loving home. Love Doesn’t Die is a tribute to her father, Yorke Devere Brent-Harris. A jazz aficionado and eternal optimist, he is sympathetically presented in this portrait. Anyone reading might wish he had been their father, too.

Brent-Harris is currently a first-grade teacher in Boca Raton, and her meticulously edited yet reader-friendly prose seems to indicate that those children are in good hands. In language both children and adults can appreciate, she describes childhood delights, such as buying an enormous block of ice to shave by hand (there’s a photo of the scraper included) for cool treats. Younger readers may enjoy the story, but parents should note that there is some discussion of alcohol and marijuana use.

If there’s one nit to pick here, it’s that Brent-Harris doesn’t share enough of her father with us. “Probably his sense of humor is what he’ll be remembered for the most,” she writes. “I’d love to hear a compilation of all the jokes he told and all the practical jokes he participated in or instigated. It would be a long list.” Yet we don’t even get one joke, or a better idea of what his sense of humor was like.

She describes several field trips her father took her on to answer questions, then goes on at length about the things she learned (such as how sugar is made from cane) but shares no anecdotes about taking the trip with her dad. It feels like a missed opportunity. A description of a near-death experience she had during a bad fall is interesting, but again steals focus away from her father.

Love Doesn’t Die is nevertheless a touching portrait of a family and the particular bond between this father and daughter. It will appeal to family members most of all, but may be comforting to women who have lost fathers they were close to as well.